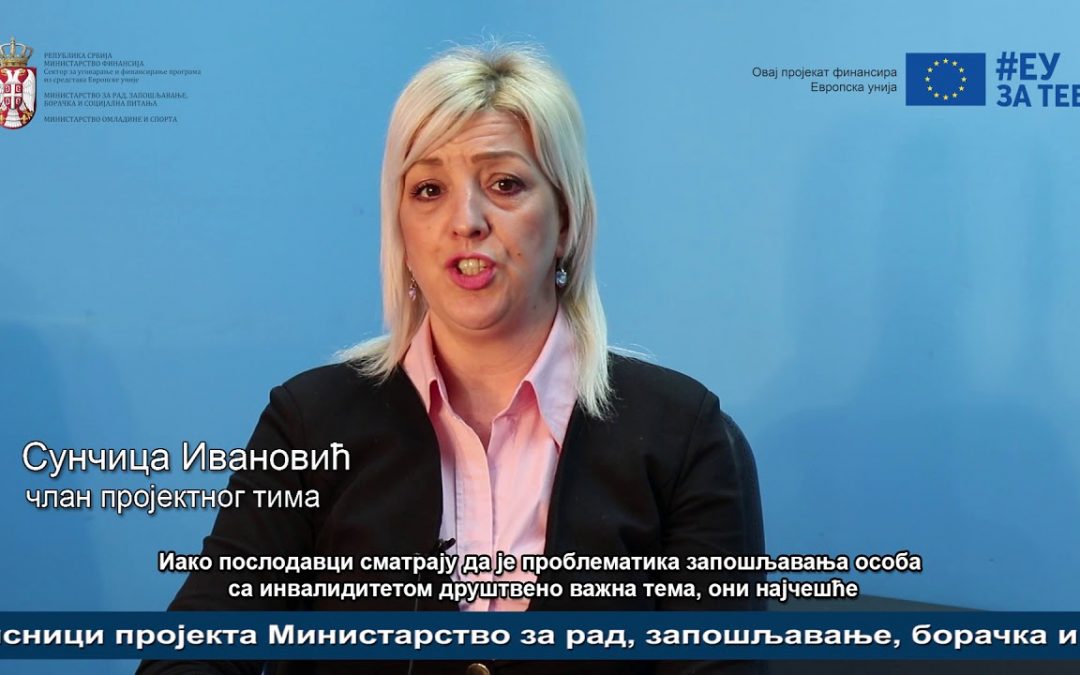 The project will produce a TV show in the “interview” format with Suncica Ivanovic (member of the project team), in cooperation with local television “Kursumlija”. The location of the shooting is TV station “Kuršumlija”. Video and audio will be available on the You Tube channel.

At the beginning and end of the video clip produced, information screens will be displayed with all the necessary visibility elements and disclaimer text.

Malina Savic, a TV presenter, will lead an “interview” with Suncica Ivanovic, a team member on the project “Activate  for more opportunities”. The project is funded by the EU, and co-financed by the Government of the Republic of Serbia, through a grant scheme “Supporting the European Union for Active Youth Engagement.

Questions that the TV presenter will ask the team :

Problems in employing people with disabilities?

Employment is one of the institutional barriers to inclusion of persons with disabilities in all spheres of social life, not only here but also in developed and economically stronger countries of the world, underdeveloped employer awareness, inadequate workplaces and lack of support services for persons with disabilities as well as the absence of a specific policy that would encourage employers to hire them is certainly a barrier to being equal with others. The realization of the right to education, the possibility of further qualification and retraining in accordance with the needs of the market, are the basic conditions for the exercise of the right to employment and subsequent economic independence.

What are the barriers to employment for people with disabilities?

People with disabilities, employers and the general public

• The length of the TV show is 5 minutes

• The TV show will be recorded in MPEG4 H264 format

• The complete spoken text will be subtitled

• The speaker’s name and title will be visible (subtitle signature)

• All text, logo, welcome and introductory screen, signature and subtitle will be in Cyrillic• During the TV show, a cronyte (runner) will appear repeatedly in the lower right corner with the following caption: This activity is part of a project funded by the EU, financed by the EU, worth 4.7 million Euros. Republic of Serbia. The project is managed by the Ministry of Finance – Sector for contracting and financing programs from EU funds, while the final beneficiaries of the project are the Ministry of Labor, Employment, Veterans’ and Social Affairs and the Ministry of Youth and Sports

Project ”Activate for more opportunities!” is a part of the European Union Support to Active Youth Inclusion grant scheme

Project funded by the European Union and co-financed by the Government of the Republic of Serbia, and implemented by the Organization of People with Disabilities of Kuršumlija and Municipality of Kuršumlija